Weber Chimney Starter – How to Use & Review

Weber Chimney Starter – How to Use & Review

In addition to reviewing the Weber chimney starter, I will mention a few tips and tricks (that I think are valuable anyways) on how to get the most of it! I bought this Weber Portable Chimney Starter (Amazon Link) together with the Smokey Joe Premium I have reviewed on this website. And I have to say that it makes barbecuing with coals or briquettes so much easier and convenient, because you can always get a nice consistent batch of hot coals in no time! If you’re wondering if you need a chimney starter… I’d ask do you barbecue with coals? If yes, then… Well yes you should be using one!

This version of the chimney starter

. The smaller one is perfect size for small and compact barbecues like the Smokey Joe Premium. This portable chimney starter makes for easy measuring of coals as well, as I can just pour the starter full and I know I have a good amount for my Smokey Joe! 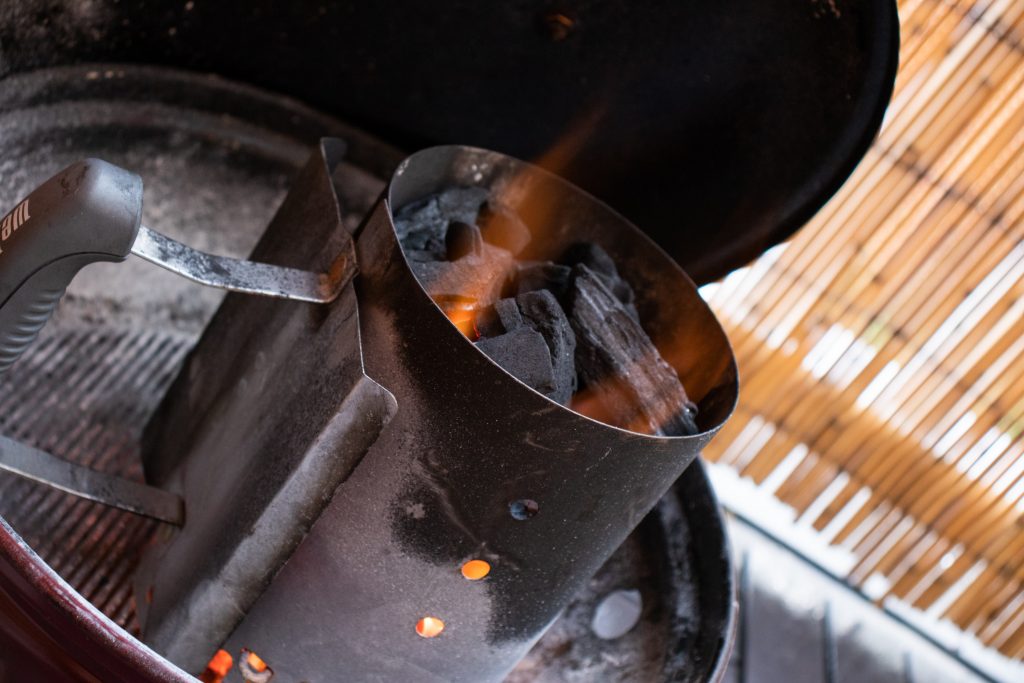 Weber Chimney Starter How to Use: The Short Version

I know I have the tendency to go on about topics for too long, so I’ll just write this as shortly as possible, and then deep in to this wonderful topic a bit more:

Or as Weber puts it: 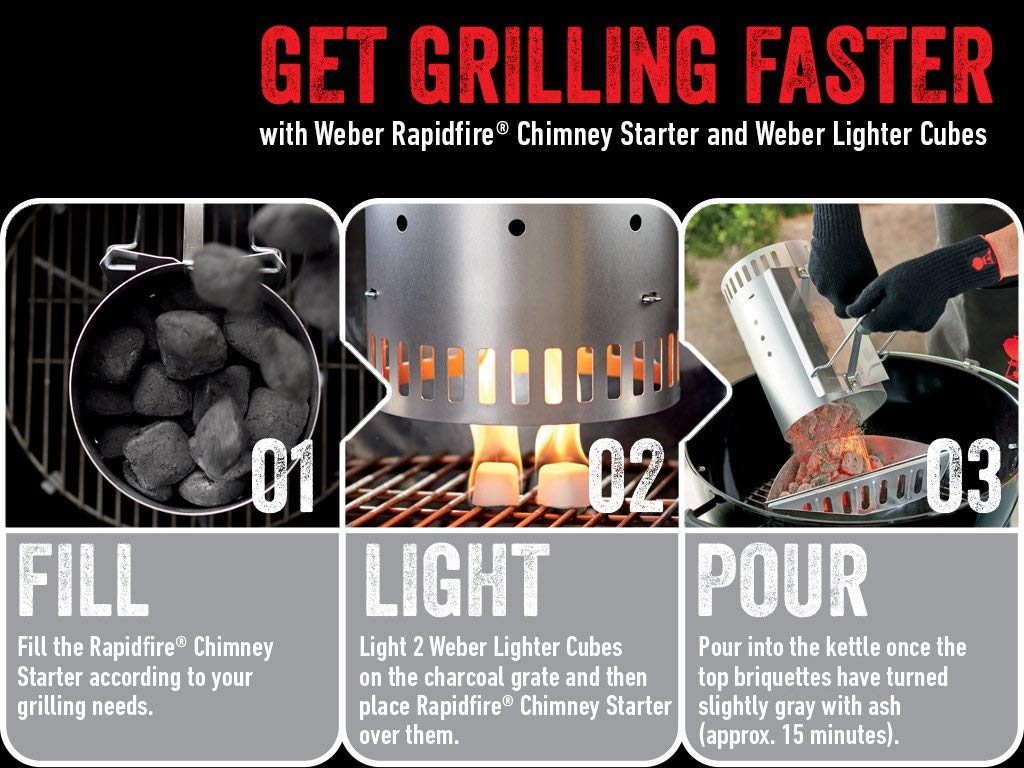 … But of course you don’t need to use their branded lighter cubes or their coal. I personally think Weber’s accessories like briquettes and lighter cubes are a bit overpriced (even if very good). There are dozens of other barbecue accessories that are as good as Weber’s pricey stuff – just keep that in mind!

Weber Chimney Starter How to Use: The Long Version

I’d like to elaborate a bit more on how I think you can get the most of your chimney starter, and also use it as safely as possible!

It’s all about airflow…

In order for the chimney starter to work perfectly, you need to always think airflow. For example I’ve tried and failed with cheap sub-par charcoals that have consisted of such tiny little chunks, that when you fill the chimney starter up there is not enough room for the air to flow. The way the chimney starter works after the initial ignition is almost like a miniature wind tunnel, that just gets more windier as the coals get hotter and the air flows through it faster. In other words the air needs to be able to flow in, flow through, and flow out of the chimney for it to work!

that currently is available as an add-on item on Amazon Prime.

And as it’s mostly about airflow, make sure you have all air vents open and the bottom grate free of lumps and chunks as it will make sure the air can circulate on the bottom of the barbecue: 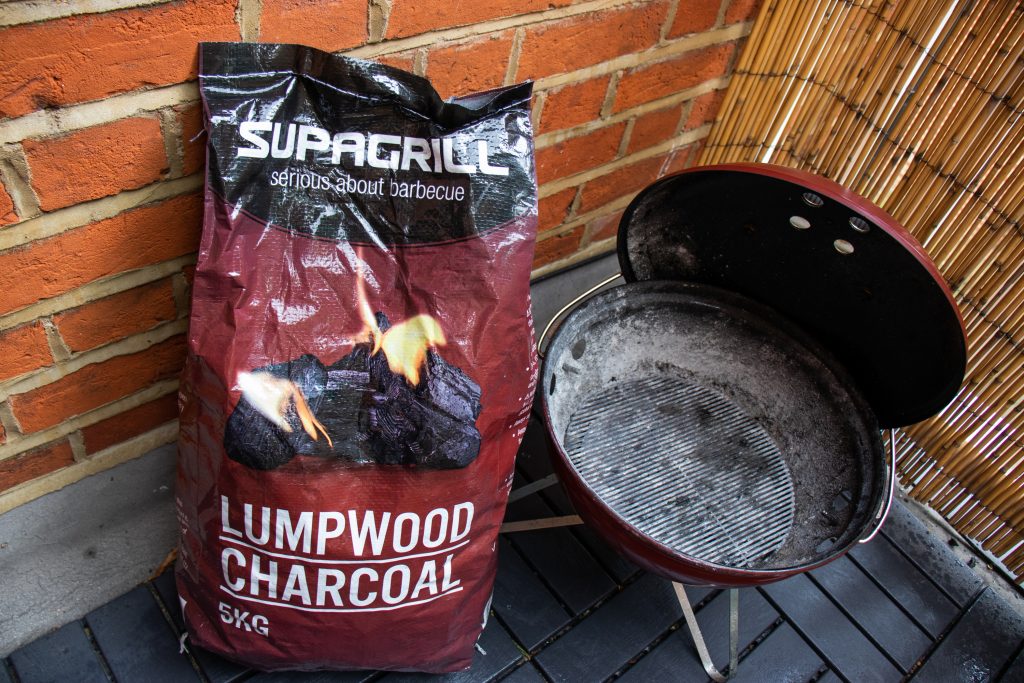 And remember, nice big chunks for good airflow in the chimney: 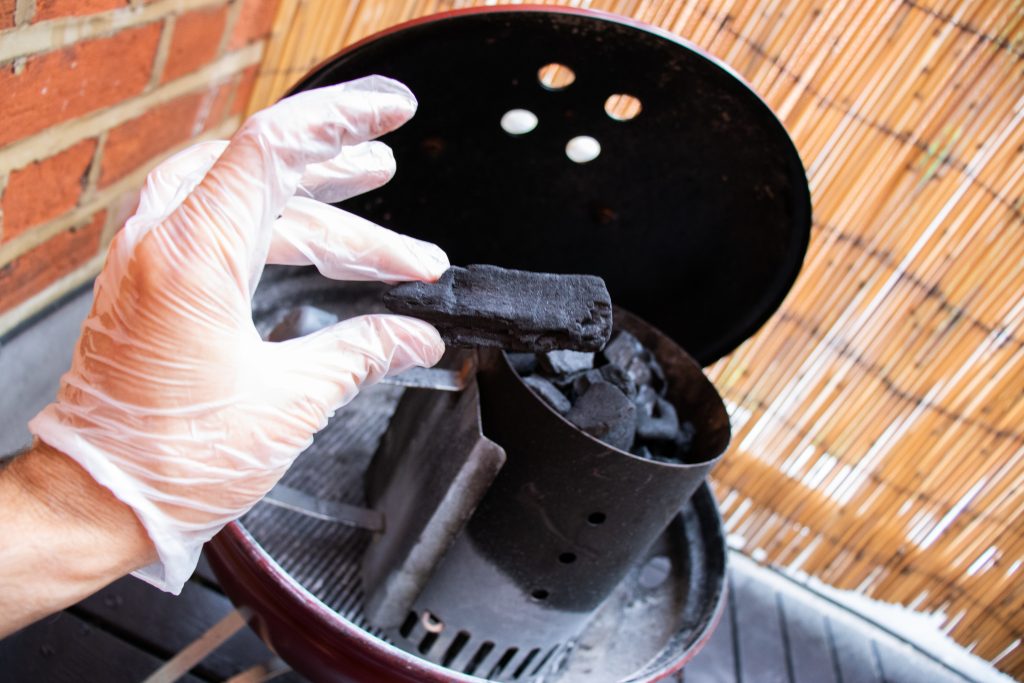 As an example on how NOT TO use the chimney starter: I once used poor quality charcoal that only had very small fragments of coal, and when I tried to light the thing up it would take ages to get going as hardly any air was travelling through the chimney… So I put two extra lighter cubes on the bottom and because the airflow was so bad, the flames actually decided to spread out from the sides, rather than go up and start the coals… And that melted the handle a bit (So, keep the coals big and chunky!): 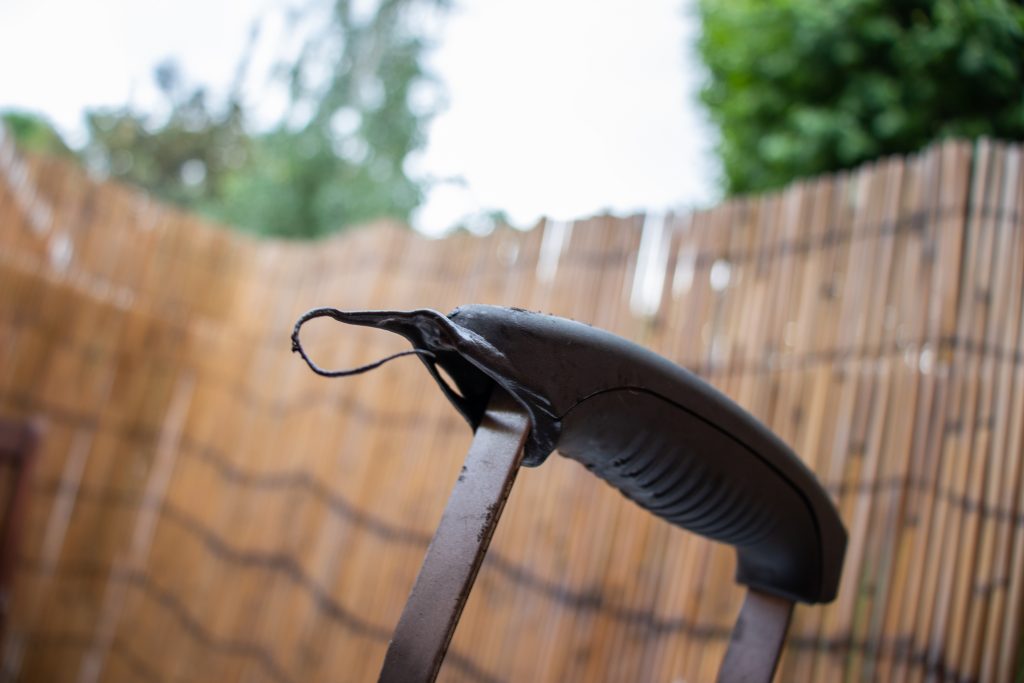 Always take proper precautions and prepare your barbecuing area accordingly before reaching for the matches/lighter. And once you have the furnace going; never leave your barbecue or the chimney starter unattended!

Weber Chimney Starter – How to Use Video:

After the knocks you just turn the chimney starter around and pour the contents into the middle of the barbecue in one decisive move, after which you put it down to a heat-resistant surface you have ready nearby. Don’t try and use the chimney starter to spread around the coals, use metal tongs instead! You want this phase to go as smoothly as possible, considering the potential fire hazards. Additionally; you could momentarily close the two air vents on the bottom of the barbecue, to reduce the chance of anything escaping from the vents when pouring the hot contents in.

I’d just like to mention I’m well aware that my positioning for the barbecue isn’t the safest in the world on this very tiny balcony, but that’s why I always have a fire extinguisher and a fire blanket at hand! I’m using proper gloves and metal tongs, so I have as safe and as full a control as possible of the potential hazards. And I do have to say using this premium barbecue by Weber feels a lot safer as it is very sturdy, and has safety-improving features and design… in contrast; if you were to use a cheap barbecue this would be a lot more dangerous.

And finally, you know you’re ready to cook when the top coals start to get an ashy coat: 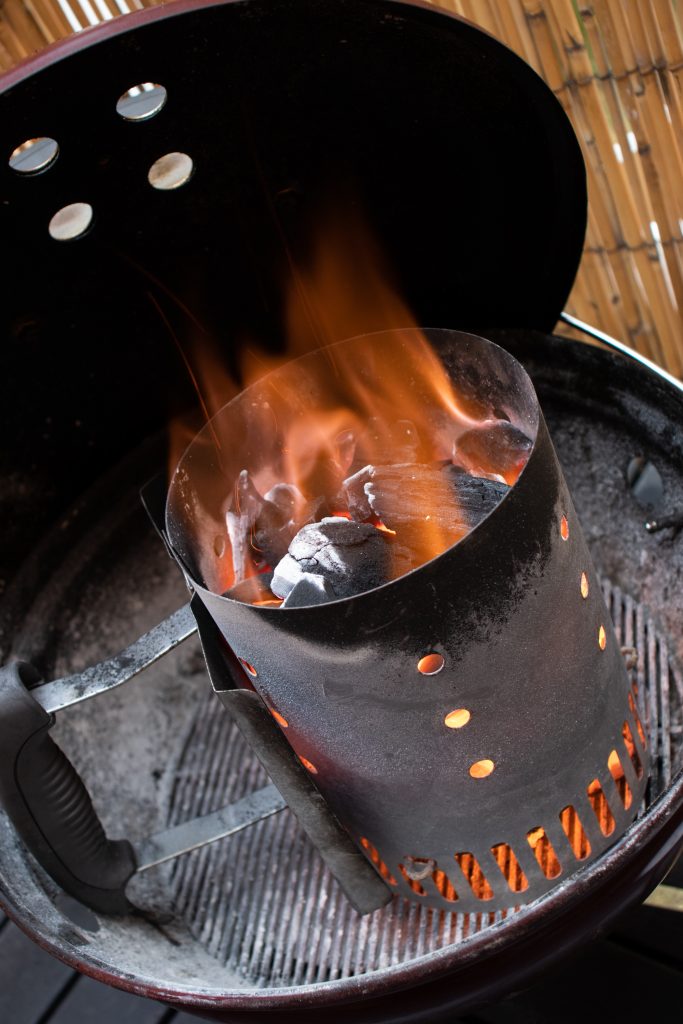 To sum everything up:

Weber Chimney Starter How to Use & Tips:

There’s not that much to talk about other than how well it’s made and designed.

As previously noted, the handle can melt indeed from direct flames, but that is not to Weber’s fault. Otherwise it’s a very solid construction and it just looks and feels like another well-built product by Weber.

The design is as good as it can get for such a simple contraption. The only time it won’t work is you fill it up so that the air doesn’t flow, or if the coals or briquettes are wet, etc – so it essentially works like a train’s toilet (a Finnish saying). But it’s not just the design in terms of functionality, it’s safety too!

As an example on how well the design works, I used an IR thermometer to measure the different locations of the chimney starter:
Handle 90°C
Heat Shield 170°C
Body 500°C

Now of course the handle will be quite warm or hot to the touch, but not that hot considering how hot the actual coals and the body of the chimney starter can get! With even a half-decent pair of barbecue or oven gloves you won’t feel the heat a bit and I think it’s very important – so you can focus on handling the chimney starter safely and not have to end up rushing anything because it’s too hot!

If you barbecue with coals more than once a summer (or winter, nothing wrong with barbecuing in winter!), then a definite yes! It makes the whole process just so much easier! The chimney starter essentially allows you to focus more on cooking, not struggling with the ignition phase of it.  No more unevenly hot coals!

But just remember, this Weber Portable Chimney starter is only suited for smaller and compact barbecues! You will have to opt-in for a bigger one if your barbecue is bigger as well. 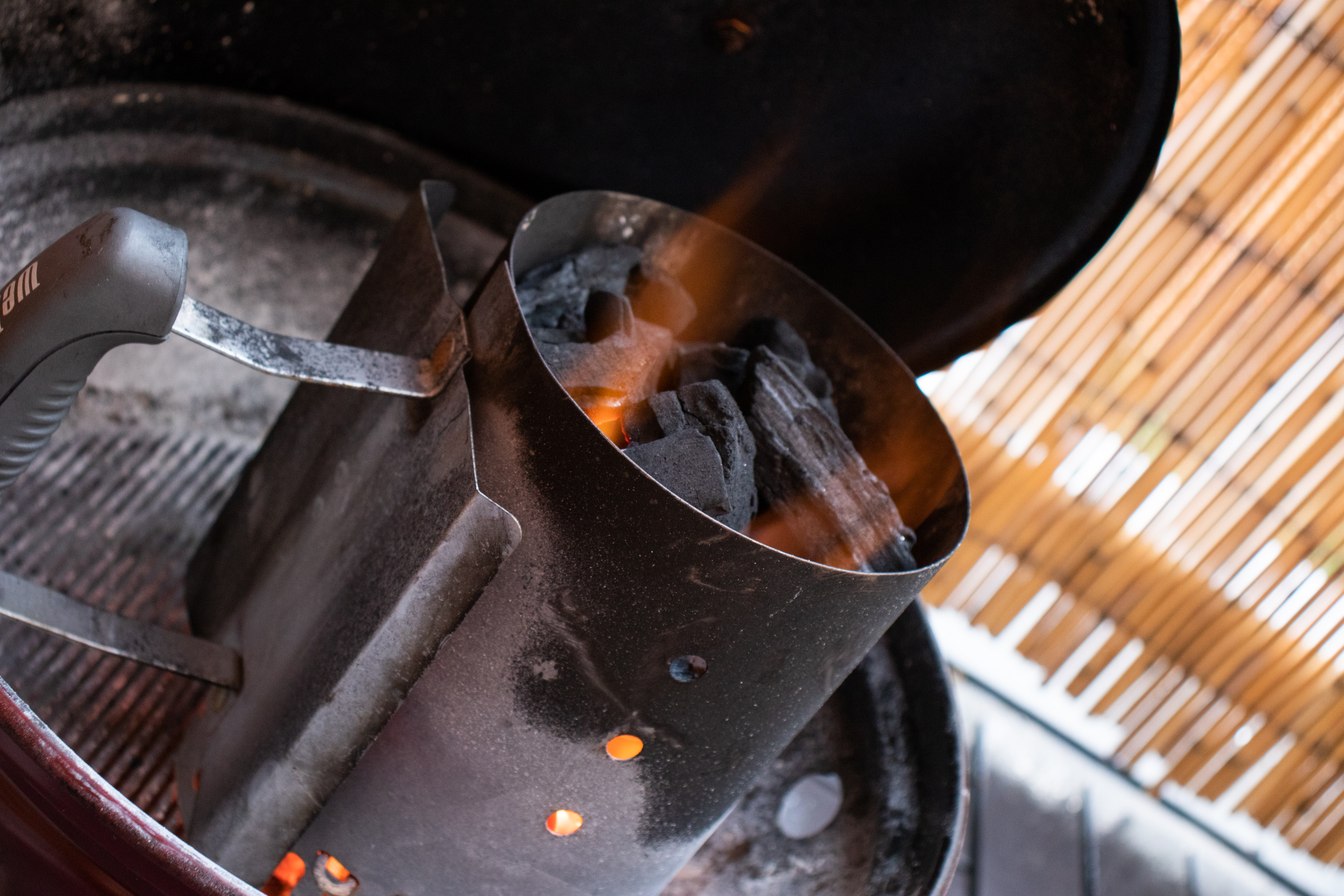 A chimney starter like this is a must for anyone who likes to use charcoals or briquettes. There's absolutely no way around it. It's simple, well made and it works as long as you use it correctly. And it's safe to use as long as you take the appropriate precautions!