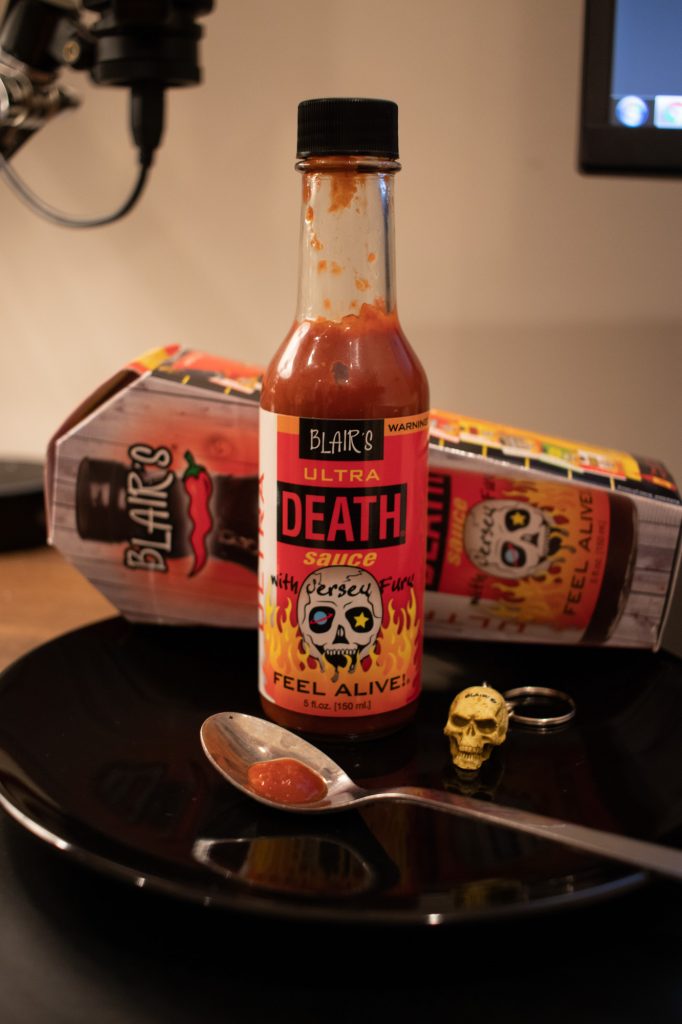 I have to (sort of) give praise for the marketing of this sauce as well. Although on that note, why does every hot sauce have to have skulls in them? If I were to make a hot sauce brand in 2019 I’d do something quirky like a cuddly bunny or a teddy bear to stand out for the competition. Anyway, back to the marketing of this sauce by Blair: It came with a ‘coffin’ which will make for a very nice packaging and especially as a gift, but it’s not so nice or sturdy that you would want to keep it or store your sauce in it. They also included a key ring that sort of looks okay, but I guess I’m a bit too old myself to enjoy the ‘coolness’ of skulls in my key chain. 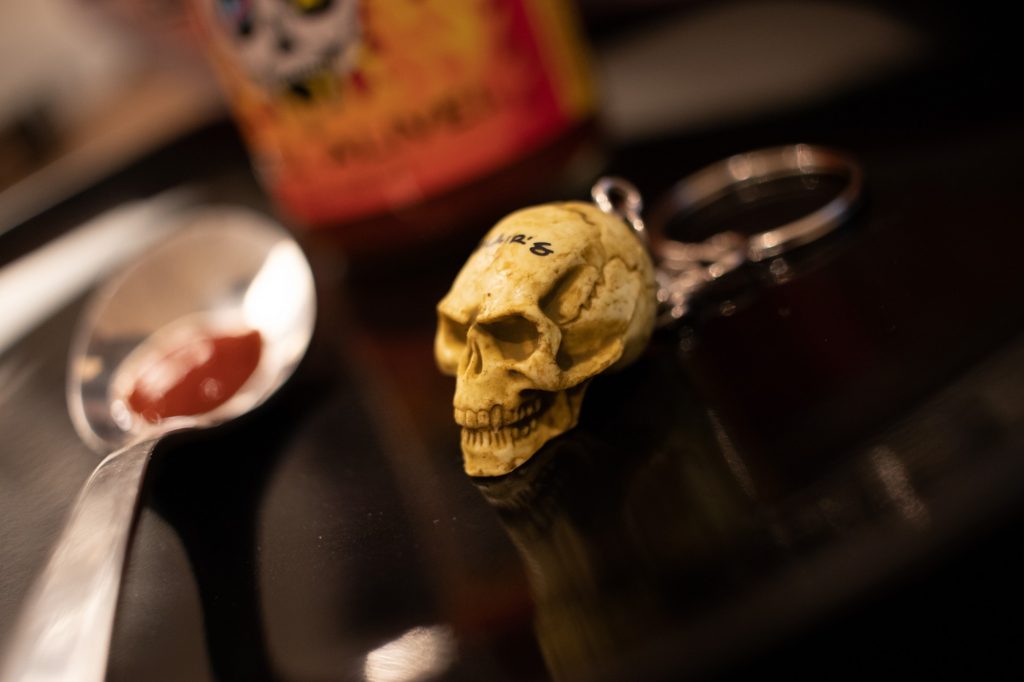 The ‘coffin’ also has a warning that it should not be consumed without dilution. But I have a feeling this is only as it’s an American brand and they just have to include these on everything so they don’t get sued. (And not that it would be too hot to consume on its own – be it very hot!) 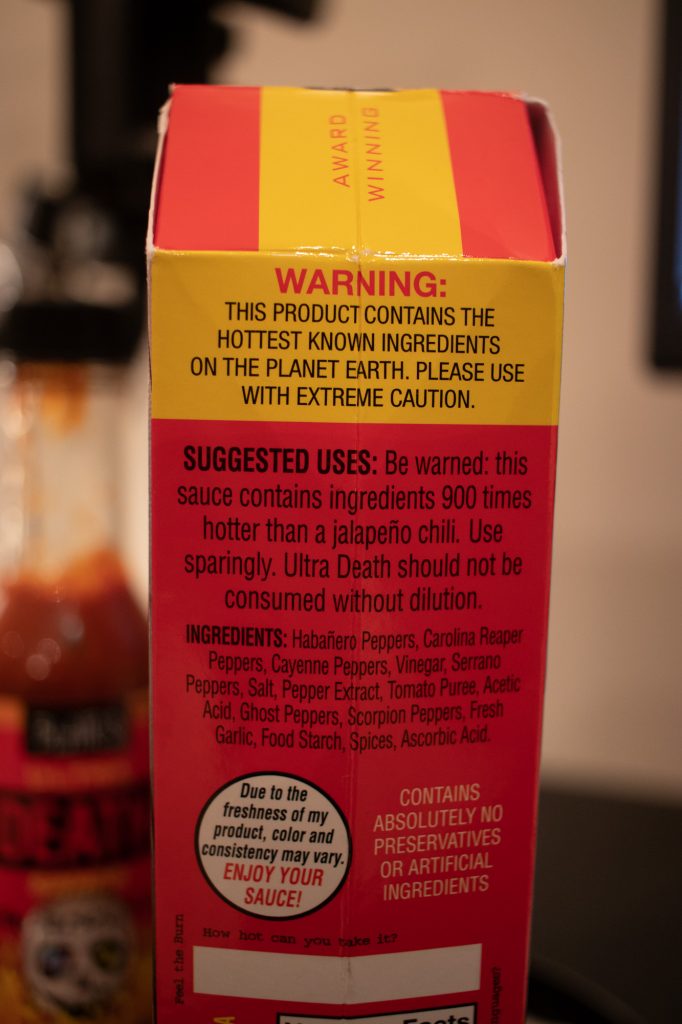 “Why! This hot sauce was so hot it made me suffer! Good heavens me! This was completely unexpected! I shall sue your company for a million dollars!”

All jokes aside Blair’s Ultra Death is so hot that you should definitely use it with extreme caution, and be careful not to rub it into your eyes and so on. But is it too hot to enjoy on its own if you are chasing the burn? Nah, not really.

The amount of peppers in this sauce is almost ridiculous, both by the variety of peppers but also the quantity of peppers. They don’t state clearly in the ingredients how much of the sauce is for example Habañeros or Carolina Reapers, but since those two are the main ingredients followed by Cayenne peppers, and as the sauce isn’t too vinegary smelling or tasting: I’m sure the top 3 ingredients probably take up for the majority of the sauce (70-90%??), and the rest are just for the flavour profile and complexity.

The sauce is quite thick, very smooth and flows well but without being too runny. It shouldn’t be runny either as it’s just full of “stuff”. And the sauce has been blended together so well it’s hard to differentiate much of anything apart from the few odd seeds here and there. It’s also very positive not to see water as a listed ingredient at all! The price is a lot higher on this than the other ones I’ve tried, but at least you’re paying for ‘HOT SAUCE’ and not ‘HOT LIQUID’. 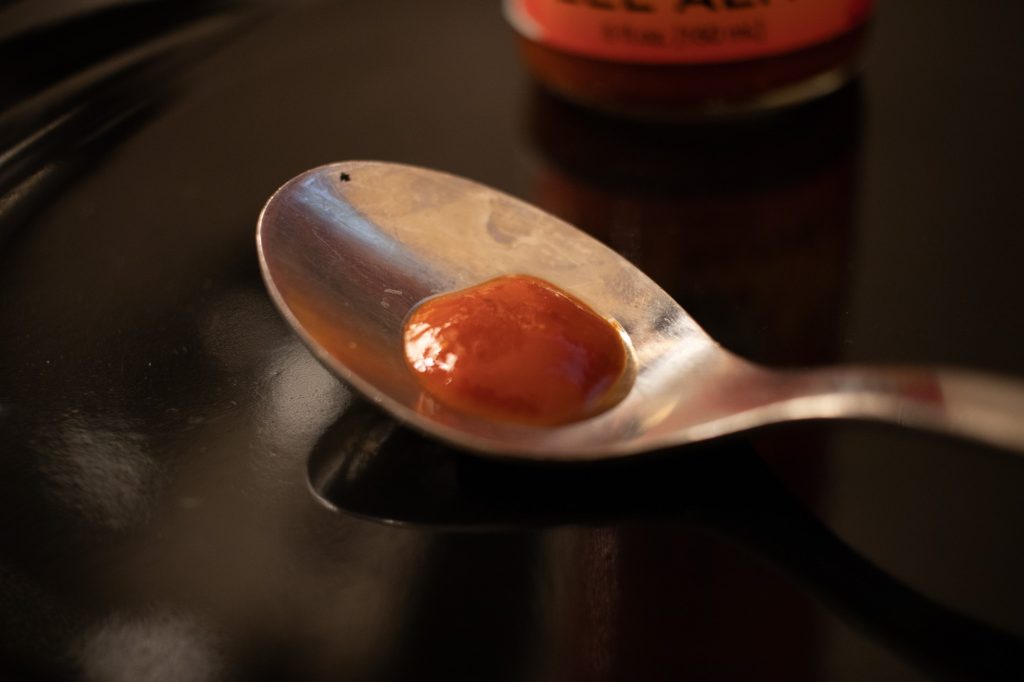 The long list of Ingredients as on the bottle:

The sauce doesn’t actually smell much of anything. Very subtle chili notes and a slight weird acidic smell (maybe it’s the type of vinegar or the Acetic Acid that comes slightly through?). Almost reminds me of the lovely aroma your stomach acids have. The sauce doesn’t smell great but it doesn’t smell horrible either.

I have to say I was a bit scared to try this, since it is the hottest sauce from Blair’s hot sauce range. As an example I recall seeing Blair’s Mega Death sauce on the YouTube show called Hot Ones – just before the ‘Last Dab’. And people seem to struggle with Mega Death quite a fair bit, and this should be ‘worse’ than that one so… BUT. I’ve tasted a careful drop a couple of times and had a drop on the odd chicken wing as well, and it’s actually not been as bad as I thought it would be!

Right… The first second or two you get the flavour which is quite nice and fruity, and then you get a series of different types of sudden ‘kicks and punches’ of heat in your face and mouth. And like it or not this sensation spreads all around your mouth with such ease – without forgetting to spread to your lips as well. The peak burn happens about 20-30 seconds into enjoying the sauce and keeps the ‘temperature’ up at around 50-60% of the initial burn for a good full minute. After a minute you start to realise that you’ve survived the sauce and it wasn’t too bad, whilst still slightly breathing funny and focusing not on licking your lips or doing anything that would make the sensation worse. Two-three minutes after everything is almost back to normal but you still have about 20-30% left of the heat lingering in your mouth in the most pleasant way – and you feel the endorphins rushing around  trying to come to aid to the pain that really isn’t there.

That is VERY hot but I wouldn’t call it as bad as the Ghost Pepper 70% by Burnörium for example. This is hotter for sure, but not in a nasty way at all. I will be using this on it’s own definitely – but not that often. And definitely not on an empty stomach to avoid getting burned twice.

All the marketing gimmicks aside like warnings on the the flimsy cardboard ‘coffin’ the bottle came in, and the key ring that you also get as merch…. Honestly even if it was just the sauce for the price I paid it would still be worth it. This little puppy will go a loooong looong way! This sauce is obviously good for dares as it’s so hot, and for cooking as well and it will go a long way in sauces etc. But this also goes very well on something you want that PROPER extra kick for, but still want to enjoy the flavours of the things you are eating. I wouldn’t for example eat 10 chicken wings with a drop of this on each, but maybe on a third of the wings or every other one could have a drop of this. And then the rest maybe a weaker sauce to balance the whole experience out a bit, as I’m sure the heat from this sauce would easily build up to be something you wouldn’t enjoy that much.

I think this is probably the hottest thing I’ve tasted in my life so far, so I’d rank it 10 if the scale would be 1-10 on how hot it is. So this is definitely not suited for people that don’t like hot or spicy foods at all.

If I were to describe Blair’s Ultra Death in one sentence:

Ridiculously hot and addictive sauce, that still packs a pleasant type of heat and flavour that you can enjoy.

Psycho Juice 70% Red Savina by Dr. Burnörium's Consistency and Ingredients A bit runny again like the other ones in the