I’ve always valued Logitech as a company, and found that their mice and keyboards have been of the most consistent in quality. I’ve previously owned (and destroyed in the dozens) anything and everything in the basic cheap range, from the MX500 original ones to the updated ones, a bunch of G-Series like G9x  & G700… So probably spent over £1000 on Logitech mice only. I’ve also tried (destroyed) a few Razer mice, a Roccat, Steelseries and such, but always keep coming back to the reliable good ol’ Logitech for daily and work use especially. Some of their mice maybe a bit hit and miss, but their overall quality and especially their customer support has been really good always! So I decided to opt for a Logitech travel mouse and chose the MX Anywhere 2 (Amaazon Link)

.  I bought it on Amazon for £69.99 in Stone colour. The black one was £50 at the time, but I THOUGHT the stone looked better based on the online pictures.

UPDATE: The review has been updated and scores adjusted accordingly on 15/10/17 based on months of regular use.

Now why did I THINK the stone colour looked better? Because of the pictures. I’ve always had (and everyone always has these days) black mice, so I wanted to opt for something a bit different. In the pictures the MX Anywhere 2 Stone looks fairly neat, silver-ish even. Something I’d say that’s pretty stylish and doesn’t look boring – especially the side details look very nice in the pictures…

HOWEVER the actual colour of the mouse is a bit off. Might have a faulty one, or maybe it isn’t… But it has a weird ever-so-slight yellow tint to it, that reminds me of what old white plastics start to look like after they’ve been left out to rot in the sun for ages. Maybe I’m exaggerating it a bit, maybe the stone colour is more of a ‘warm grey with earthly tones’ – but I think a bit more clearly silver/grey one would have been a safer choice.

Enough about the colour!

There’s a lot more to the mouse than just by general despair that resulted in the poor choice of colour. It’s small, but still comfortable to use. For me at least. I’m the ‘palm grip’ kind of a mouse user and even though the mouse runs a bit short from fitting ‘like a glove’, I can still grip it comfortably. And that’s what you want from a travel mouse; you want a small enough mouse that you’re not bothered about carrying around with – but of course you need to be able to use it comfortably.

Also, it has the right amount of buttons I like: The usual three and then two on the side for quick back/forth or whichever button you choose to bind there.

Plus the option to have three profiles – but these are a bit pointless to me at least on a travel mouse.

Here’s the mouse next to a Razer DeathAdder 2013 for size:

In the Amazon description they refer to something called Dual Connectivity. This includes the Pico receiver and Bluetooth support, but the mouse also comes with a cable (that’s how you charge the battery). So there’s actually three ways of connecting the mouse to your computer, not two. But who’s counting.

The *Pico unifying receiver is the more ‘classic’ way of connecting your mouse to your computer and it is as tiny as ‘pico’ suggests. The mouse also supports something they call ‘Smart’ Bluetooth wireless technology, which seems to work as well as with the receiver. All you have to do is press the ‘Connect’ button from the bottom of the mouse and pair it like any other Bluetooth device. Now whichever method you choose is up to you.

(*=That small thing sticking out from the USB port next to the power cable is the Pico receiver):

Criticisms. Yes, in addition to the colour.

I have mainly two criticism that aren’t colour related, and one of them is a bit unnecessary and the other is something that just requires getting used to. So nothing too bad really.

Criticism Number One: The Pico receiver cannot be placed inside the mouse. Some travel mice, and if I recall correctly some Logitech mice even, have had a tiny hiding place for the wireless receiver so it always stays with the mouse. In most cases you probably can just leave it on the laptop you carry around and it’ll be fine because it is so small. But then again it would be prone to bumps and damage; and in my case my Zenbook fits so snuggly into the Inateck Sleeve (Amazon Link)

I bought for it, so that I feel I’m having to force the laptop into the sleeve if the Pico receiver is still connected. Of course I could and will just use Bluetooth for now, because then I won’t have to plug / unplug the receiver all the time or even keep with me… But I’m not sure if I want to keep Bluetooth always on on my laptop especially when I’m out and about. But I’m fairly sure I will lose the whereabouts of the Pico receiver after a few trips abroad and back – because it is so tiny and there’s no safe place to put it!

Criticism Number Two: Mouse 3 button location. It’s not on the wheel, it’s behind the wheel. This is a bit unnatural for me to use, but it’s not the most important of buttons as I’m mostly used to opening/closing tabs when browsing online with Mouse 3 – but it still feels a bit weird. (If you press down on the mouse wheel it alters the scrolling mode between free/normal)

More criticism! (Update: Based on months of usage)

I’ve not been let down by the mouse per se in the months I’ve used it. However: With my Zenbook & Windows 10 and while using the mouse’s own Wireless Bluetooth Connectivity and not the Pico receiver, the mouse acts up sometimes… Maybe 10% of the time roughly. And by acting up I mean that the mouse just starts to lag and jump around like crazy, and turning the mouse itself off and on again doesn’t seem to help but resetting the computer it’s connected to solves this always.

But I do have to say it is a bit annoying when it happens sometimes out of the blue. The mouse doesn’t however do this when used with the Pico receiver, but as explained earlier it’s not the most convenient thing for me to have stick out of the laptop all the time and as there’s no storage in the mouse for the receiver I don’t want to carry it with me either, because I would probably end up losing it in no time.

Just keep in mind: This ‘acting up’ could of course be related to Windows 10 rather than the mouse itself (Or the Zenbook for that matter) – but for the time being as I have no way of knowing which it is, I’ll just have to mention it and let you decide. If I had to guess, I’d trust Logitech and their products more so than the capabilities and reliability of Windows 10.

The actual mouse is a good overall travel mouse, and a display of the typical quality and design you would expect from Logitech. And if you are not fussed about being able to hide the Pico receiver inside the mouse or the Mouse 3 -button location… Then maybe this is the mouse for you.

But if you’re even a bit unsure about using that weird little button behind the scroll wheel and would find it a bit worrying as you use Mouse 3 often, then it’s probably more sensible to look for something else rather than trying to force yourself to get used to this as it is quite strange.

And in this ‘stone’ colour? Probably not unless you’re some sort of a pervert who appreciates the washed-out yellowish tint that every keyboard or other ‘white’ plastic used in electronics turns out after a couple of decades. OK… Maybe the colour isn’t as bad as I’m making it out to be, but it kind of bothers me (if you can’t tell) and every time something truly grey or silver is put next to it, the yellowy tint just stands out so much more.

So a careful yes, but if I would buy the mouse again I’d definitely try the black version:

If you feel like any of the information I have provided proves to be helpful for you in making, or not making the purchase decision for the Logitech MX Anywhere 2 Wireless Mouse, I’d greatly appreciate the use of the Amazon links provided. 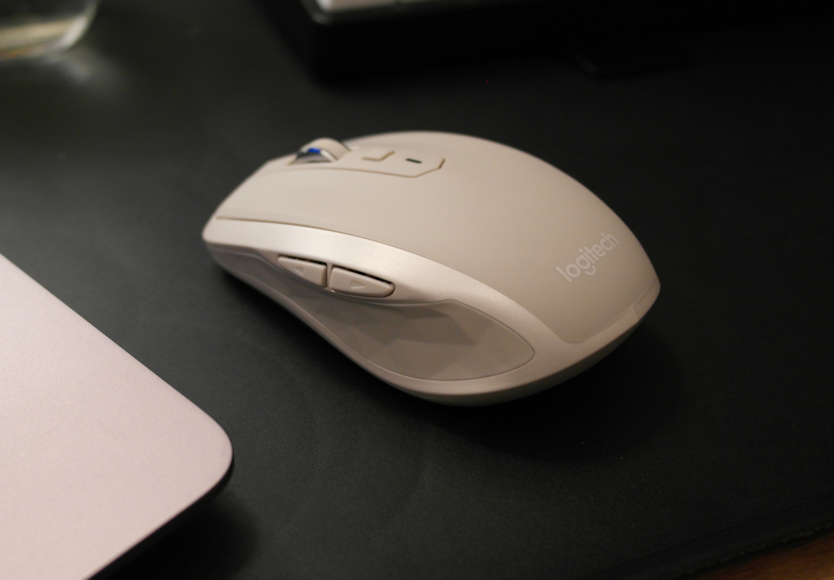 A decent travel mouse from Logitech, but I just wish I'd chosen the other colour...

It's a shame the colour is what it is. I probably would have liked the mouse a lot more if chosen the black one, but the fact is that I opted to pay £20 more for something that looks a bit hideous to me! So I feel very silly for spending £70 on a mouse I don't massively like, even if I like to use it. Therefore I don't feel like I got much for my money. I'm not giving up on Logitech, but I'm giving up on anything they might brand as 'Stone Coloured' from now on.