I found this to be even tiny bit runnier than the other two Psycho Sauces I tried – but again it does look very wholesome and authentic with all the seeds and other little bits of the chilies in it. After reading the ingredients a bit more carefully I noticed that the difference between this and the two other sauces (apart from the chilies used of course) is that this one doesn’t have any carrot in it. So that’s probably why it’s a bit runnier. 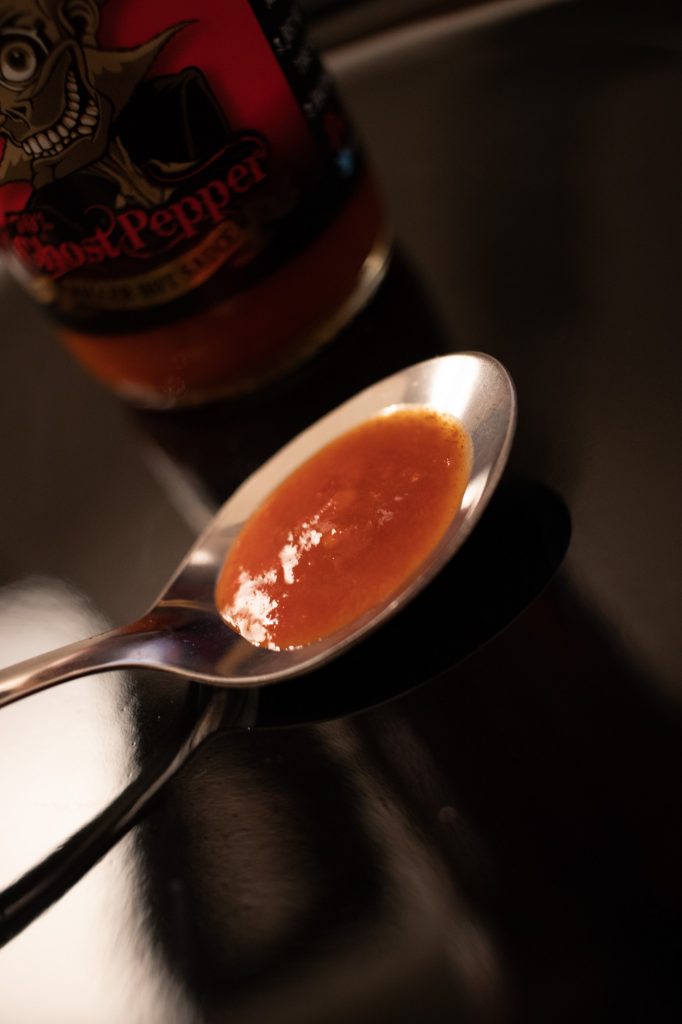 Super fragrant! You can definitely tell even quite a long distance away after opening the bottle, that there’s something hot going on in there. And on a closer whiff this sort of reminds me of the fruity and nice smell that Tabasco Habanero sauce has. It’s almost a bit smokey but still very fruity and nice. And as it consist of 70% chilies it should be quite fruity.

Ok then! This is actually very hot and painful to eat on its own! This sauce has a rating that is probably more closer to what the bottle says unlike the other two. Between 1-10 this is probably closer to 9-10. The heat stings your tongue like a bee right away but it’s still got a nice and fruity flavour to it, and the pain is not artificial or awful – even if quite bad. This sauce is so hot that it’s probably a bit too hot to be enjoyed on its own, but will be a nice addition to cooking as a part of a sauce and so on (or pranks and dares).

In 5-10 minutes or so the pain has gone completely but you can still taste a bit of chili in your mouth – and it’s actually a pretty nice taste.

Very hot! Very nice! But too hot to be had on its own – at least for me. But this will definitely be used in cooking, and the two milder Psycho Sauces as is depending on if I’m fancying a milder heat or a bit more of a kick. I have to say I’m well impressed with the Triple Pack I got because I paid 13 odd quid for the three bottles – and on contrast I paid 13 odd quid for Blair’s Ultra Death sauce too… And at least with the three bottles you get to choose your poison – rather than just pure pain. (Which I’m expecting Blair’s Ultra Death to be)

If I were to describe Psycho Juice 70% Ghost Pepper in one sentence:

Perfect condiment for cooking, but on its own only good for dares and pranks – as it’s a bit too hot on its own.

Or you can get better value for your money by getting the 70% Ghost Pepper in the Triple Pack that includes two milder varieties: